Tasting On the Circuit 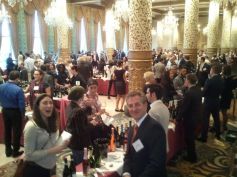 Whenever I step into a room with wines stretching from one end to the other, I know good wines are waiting to be tasted. Not only will I enjoy seeing old familiar faces, but I always feel a real sense of gratification when I try something new, a yet undiscovered gem to add to my repertoire of terroir.

I was not to be disappointed.  Mr. Ramzi Goshn, one of the owners of Massaya Winery in the Bekaa Valley, Lebanon, introduced me to his family of wines.  The 2012 Massaya Blanc proved to be a conversation starter when he described the blend.  In addition to Clairette, Sauvignon Blanc and Chardonnay, Obeidi was a part of the blend.  Believed to be an ancestor to Chardonnay, it is also used in the very traditional and aromatic aniseed-flavored spirit, arak.

One cannot help but be in awe when drinking wine from an area that has a 5,000 year-old history of wine making.  We know that the Phoenicians made wine in this area possible because of the long dry sunny summers and mild winters.  Not as susceptible to rot and mildrew as our Burgundy counterparts, sunshine and dry heat offer a longer growing season providing riper grapes. Many of the grape varieties used in Lebanon and the Mediterranean region in general are familiar: Syrah, Cinsault, Grenache, Mourvedre, Cabernet Sauvignon.

Following a refreshing Rose, I delved into the three reds: the 2011 Classic, 2010 Silver Selection and 2008 Gold Reserve, all reds.  Overall , they expressed a lean, minerally style more in line with their French counterparts in the Rhone rather than Napa Valley or the coastal US. Whenever a winemaker offers a taste of an older vintage, one should not miss it.  As we know, a good quality wine almost always benefits from age, and the 2008 Gold Reserve was no exception.  Fuller-bodied than the Silver Selection, wonderful tertiary aromas of dried plum, cherry, leather, graphite enrobed in an exotic layer of smokiness.  After a meal with this wine, a hookah is in order….Cheers.